Home » Biography » Amanda Balionis: IS She Engaged To Her Boyfriend? How Old Is She?

Amanda Balionis: IS She Engaged To Her Boyfriend? How Old Is She? 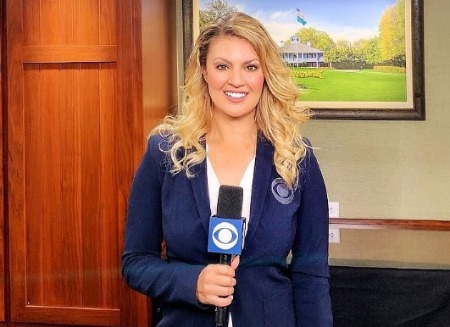 Amanda Balionis is a popular sports news reporter and currently reporting for golf for CBS. Before joining CBS, Amada worked for the PGA Tour for five years and also, hosted digital content for Callaway Golf.

Over the years, she has covered many sports games like volleyball, basketball, and golf. In addition, Balionis named as one of the most stylish people in golf. So figure out how much her net worth is? What is her current relationship status? let’s find all out in detail.

Who is Amanda Balionis Boyfriend?

Amanda Balionis is one of those celebrities who love to keep personal life under the warp. However, back in 2014, Balionis talked about her relationship on social media while replying to the tweet of one of the Twitter users.

Though she has kept her boyfriend’s name confidential. After a month, Amanda again gushed about her boyfriend stating, she was with him at Universal Studio but did not disclose his name.

Following the year, one of her Twitter users popped a question asking if she was engaged to her boyfriend or not and replied, No!

The same month, Amanda took an Instagram and shared a picture, showing a beautiful ring but stated that she was not engaged.

The sports reporter Amanda Balionis was born in 1987, in Pittsburgh, Pennsylvania. Later, she moved to Lancaster, Pennsylvania along with her family at the age of 10 where she started playing volleyball in high school.

During the university, she was involved in the local WRHU radio station, The Chronicle student newspaper and the Association for Women in Communications.

Career as a Sports Reporter

After graduation, Amada first worked as a reporter in the local newspaper and TV sports broadcasting.

Since university, Balionis has had an active career, working for the local newspaper and then moving into small TV sport broadcasting jobs. Balionis also had a strong social media presence with around 49.6k followers on Twitter and 41.8k followers on Instagram.

While at the university, Balionis interned in network channel like CBS 2, ABC News NOW, The New York Islanders and The New York Jets. from 2008 to 2009, Balionis worked for the local Lancaster Newspaper as a reporter as well as hosted weekly online segments.

Afterward, Amanda spent 10 months as a Volleyball Commentator and Featured Reporter for MSG Varsity, covering the news of volleyball and football segments.

In March 2011, he was offered the opportunity to become an anchor and reporter for PGA TOUR where she served for five years. This led her to host & present for Callaway Golf in April 2016.

Further, her career took to the next level in 2017 after joining CBS. Through the year, she has hosted many CBS golf segments and also, become the main controller of mobile 72-inch SmartCart screen.

In earlier the year of 2019, the sports reporter appointed as the first social media correspondent for Super Bowl. At the time, she expressed her feelings and even vowed to fulfill her responsibilities.

The reporter earns a significant amount of salary from her profession. She got paid between  $37,000 to $45,000 per year. Amanda Balionis has an estimated net worth of around $500,000. At present, she is living in San Diego, California.