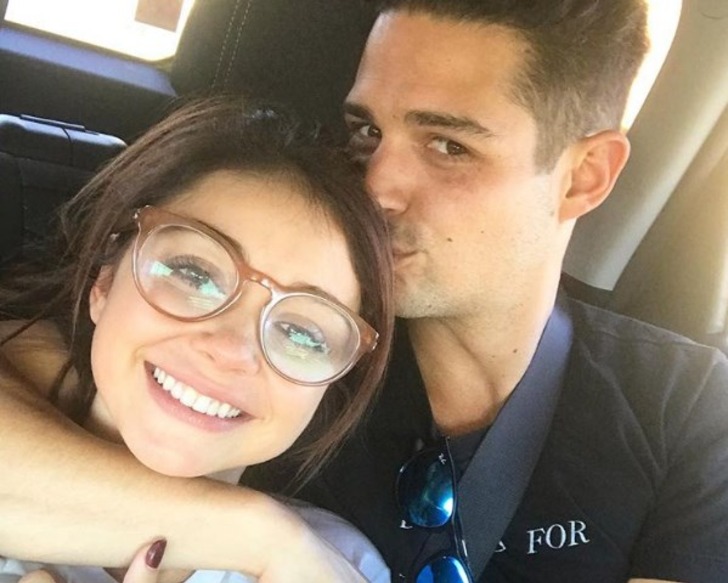 Social media is a big platform to share news and stories with fans, but sometimes it’s better not to choose to display your personal life on the internet. Coincidently, the Modern Family actress, Sarah Hyland, and The Bachelorette season 12 contestant and radio personality Wells Adams’ love story started by Twitter flirtation.

Sarah Hyland, who plays Haley Dunphy on ABC sitcom Modern Family, is one of the most notable roles to date. Let’s take a look at Sarah’s acting career, income, salary, and love life.

Before getting into her professional and personal life, let’s know some quick facts.

Sarah Hyland and Wells Adams are getting married very soon. But when?

The couple shared a series of photos on each social media accounts with a caption with love emoji.

That can't eat, can't sleep, reach for the stars, over the fence, world series kind of stuff ✨❤️ @wellsadams

On those pictures, Adams get down on one knee on the beach and pops the question to Sarah to marry him.

In the second photo, both Sarah and Wells proudly showed off her sparkling diamond ring.

In addition, her fiance posted a minute clip on his social profile.

How Did Sarah Hyland and Wells Adams Met?

Sarah Hyland and Wells Adams have been dating since 2017, but it seems like their relationship is getting stronger than ever. Their love story started with a tweet on August 2017, during the fourth season of Bachelor in Paradise.

Then the pair appeared together for the first time in Halloween image for Instagram in October 2017. Later, the following year, many sources confirmed them as a couple. Since August 2018, the duo has been living together in Los Angeles.

Speaking about her past affairs, Hyland was in a relationship with her co-star Matt Prokop for almost four years.  Back in August 2014, Sarah claimed that Matt abused her physically and verbally so, she broke up with him.

Then Hyland moved on to Vampire Academy co-star Dominic Sherwood but split up in early 2017.

Since she was a child, Sarah has been suffered from kidney dysplasia. In 2012, her father transplanted a kidney but unfortunately, that kidney failed to lead to her brother donated a second kidney in 2017.

During her lifetime, she has undergone 16 surgeries that related to her health issues.

It didn’t take a long time to establish herself in Hollywood.

Since age four, she began working in many commercials. Sarah made her debut as Howard Stern‘s daughter in the biopic movie Private Parts in 1997.

Following the year, Sarah shared the screen with celebrities, Jennifer Aniston and Paul Rudd in the film The Object of My Affection.

She made her appearance in such films as Cradle Will Rock, Joe Gould’s Secret, Conception, Vampire Academy, Satanic, and more. Also, she had a voice role in movies Blind Date, and Lego DC Comics Super Heroes: Justice League – Gotham City Breakout.

Moreover, Sarah Hyland landed on the small screen as well. Since 2009, Sarah is playing the role of Haley Dunphy, the daughter of Claire & Phil in the mockumentary family sitcom Modern Family. Additionally, she appeared in many soap operas; As the World Turns, All My Children, Another World, Repeat After Me, The Lion Guard franchise series and so on.

Besides, she had a guest-starring role on NBC series Law and Order: Special Victims Unit and a supporting role as Brooke Shield‘s daughter in the television Lipstick Jungle.

How much does the Modern Family actress earn? All actors from the series are well-paid.

Born on November 24, 1990, in Manhattan, New York, Sarah Jane Hyland turned 28 in 2018. She was born to actors Melissa Canaday and Edward James Hyland. She has a sister, Ian Hylan, who is also an actress.

Sarah attended the Professional Performing Arts School in her hometown and then pursued her career in the film industry.

The Modern Family actress has won the hearts of millions of fans through her roles on various social networking sites such as Twitter, Facebook, and Instagram.

On Instagram, Sarah has over 6 million followers, where she keeps posting her recent day-to-day activities to her fans and followers.