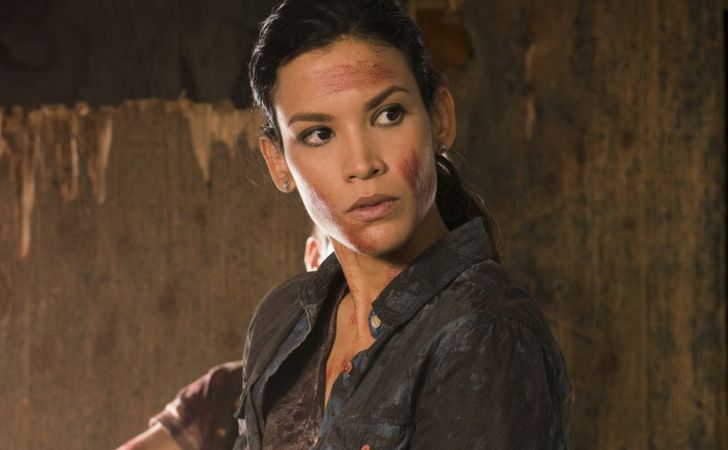 Danay Garcia is a Cuban actress who plays Luciana Galvez in AMC’s spin-off series Fear The Walking Dead, a prequel to The Walking Dead, which explores the early breakout of the zombie virus in Los Angeles. But Danay’s fame came from her role in Fox’s most popular drama series Prison Break as Sofía Lugo.

Today, we will discuss Danay’s early life, education, career, and her net worth. So stick around!

Danay Aguilar Garcia was born on July 5, 1984, in Havana, Cuba. The details about her parents remain unknown to this date. However, she has a mixed heritage, Chinese, and Italian from her father’s side and Spanish from her mother’s side. Her name originates from Greek(Dah-Nay), meaning Goddess of Abundance.

A simple message just for you. ? Perhaps the most important thing we bring to another person is the silence in us, not the sort of silence that is filled with unspoken criticism or hard withdrawal. The sort of silence that is a place of refuge, of rest, of acceptance of someone as they are. We are all hungry for this other silence. It is hard to find. In its presence we can remember something beyond the moment, a strength on which to build a life. #thisisus #silence #thisishappening #danaygarcia #gratitude #graciasportanto #universeonmyside #unide #love #workflow #magickingdom #tvshows #ladyonthego #happiness Never forget the magic ??

At the age of 10, she started learning Ballet, Salsa, African Dance, Meringue, Belly Dancing, and Flamenco. Danay’s formal education is not known; however, she attended many acting classes and also learned more dancing techniques from Debby Allen Dance Academy. Her early pieces of training paved a path for her in Hollywood.

Her body measures 34-26-35 inches, and she weighs around 56 kgs with a shoe size of 10. Danay has dark brown hair complimented with equally browner eyes.

Danay’s career has been a remarkable one. She first went public at the age of 17 with Maria Antonia, directed by Eugenio Hernandez Espinosa in a Havana theatre. To become a bonafide actor, she started learning with teachers and dialect coaches to perfect her spoken English.

Besides, she as a model, booked commercials while focussing on her acting career. Finally, her first feature film came alongside Marisa Tomei in the thriller-drama Danika. From then, she moved onto guest roles in Tv. Nonetheless, she didn’t stop involving in Mexican productions like From Mexico With Love.

My #tbt is dedicated to the epic moments when everything is about to go down! ???? @feartwd @that_mo_collins @darylchillmitchell #funepisode #luciana @amc_tv #thewalkingdead #universe #characters #danaygarcia #gratitude #graciasportanto #quotestoliveby #twd #ftwd Never forget the magic ?#queen

These involvements landed her the role of Sofia Lugo in the highly acclaimed Prison Break. Likewise, she nabbed the Bond Girl role of Camille Montes for Quantum of Solace but unfortunately had to drop because of her contract with FOX. After her significant roles, she had guest roles in many television productions.

Besides her drama roles, Danay also starred in Man Camp, which was a comedy. Garcia had several film projects; Liz en Septiembre, Cenizas Eternas, Beyond Grace, Sniper: Ultimate Kill, Avenge the Crows, etc. are, to name a few.

Ultimately, another prominent role arrived at her doorstep when she got cast as Lucian Galvez in AMC’s Fear The Walking Dead. She appeared as a recurring character, and at present, she is one of the main casts.

Danay Garcia Net Worth | How Much Does She Make?

Danay has worked as a model and now is an actress with prominent roles in bigger productions. Although limited to Tv productions, she has not slowed down. Being active since 2006, her net worth as of present is $3 million.

As for her salary per episode, sources confirm that she gets paid around $20k to $30k. Danay’s other sources of income are not known, and other assets also remain in the dark.

Danay is supposedly single at present. But we can confirm that she was in a relationship with her Prison Break co-star Chris Vance. Her present status is yet unknown. A further update is due.