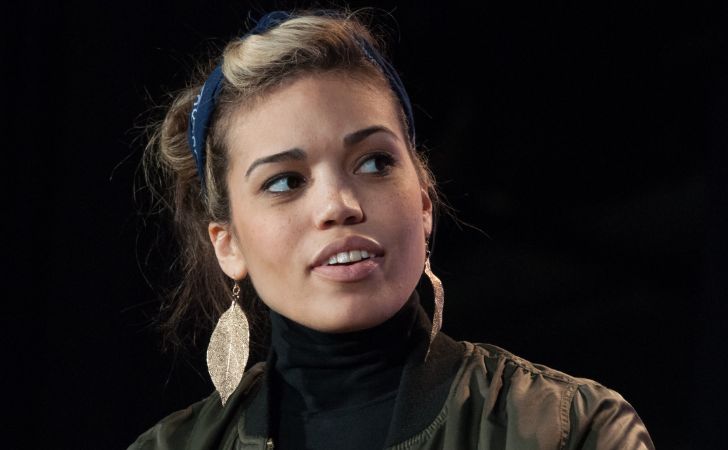 Ciara Renée is an American actress, musician, and dancer who came into limelight from her Broadway stints such as Pippin, Big Fish, and The Hunchback of Notre Dame. Mostly a theatre actress, Renee managed to land a role in CW’s Arrowverse series, thus breaking into Tv as well.

This article discusses the wondrously talented and passionate actress who is trying to shoot big in the entertainment industry!

Ciara Renee was born on October 19, 1990, in Harrisburg, Pennsylvania, USA. In the same way, her mother is Tanya Van Hove, whereas we are unaware of her father. Renee has an older brother named Billy. Born in America makes Renee an American national.

My mama is the real deal. She did it all, and all by herself. #HappyEveryDayToYou #Grateful #Blessed #ButReally #MamaHawk

However, she classifies as multiracial as she identifies as African-American ethnicity with European, Indian, and Native American heritage added to the mix. Also, Ciara has a Libra Zodiac sign. Since she was born in a Christian family, Ciara follows Christianity.

#FeelinMyself for those shoulder caps. And how much easier (though it still ain’t easy) this feels now compared to a few months ago. I am so grateful for my trainer and for my dedication to #Consistency! . . #TatiTrainsMe #Fitspo #KeepAtIt #JustDoIt #WorkHardTrainHard #ThatFitLife #SelfCare #Gratitude #WomenWithMuscles #CrunchGym

However, Ciara’s dress size and shoe size remains under review. In the same way, she has naturally dark brown hair, often dyed blonde for roles, matched with dark brown eyes. On the other hand, her most distinctive features are her sharp jawline, high forehead, a toned body, and a beautifully freckled face.

Ciara Renée Career | Who Is Hawkgirl In Legends of Tomorrow?

In the acting sector, Ciara is prominent as a theatre actress. Although she started in theatre, screen roles are slowly approaching her. The year was 2013, and Ciara played the role of a witch in a stage musical titled Big Fish which is a novel adaptation.

Following year, she landed a role as a leading player in the musical Pippin which played in Broadway for six months from April 1 until September 14. Meanwhile, Ciara was also working in the stage production of The Hunchback of Notre Dame as Esmeralda. This play lasted for over five months, starting in October.

In like manner, “Tick, Tick…Boom!” was a 2016 production that involved Ciara playing a character named Susan. It was a three-month stage production. Finally, Jesus Christ Superstar was her last theatrical gig before she would officially move onto television.

While working in stage productions, she made a guest appearance in Law & Order: Special Victims Unit. Granted that Ciara garnered a certain level of fame as a stage actress, she cemented her popularity with her roles in The CW’s The Flash, Arrow, and Legends of Tomorrow.

Tonight! Catch the second episode and conclusion of our pilot at 8/7c on #TheCW This is an ep you won't want to miss! #Hawkgirl #Hawkman #DCLegends #LegendsOfTomorrow #Firestorm #Heatwave #CaptainCold #WhiteCanary #RipHunter #Atom #ItsAboutToGoDown

Furthermore, Ciara made guest appearances in Master of None as Ellen and in The Big Bang Theory as Sunny Morrow. However, she is going to be part of The Chinese Cop in an unspecified role which is in post-production.

Let’s move onto the roles that shed limelight on her stature as an actress. Ciara first appeared as Kendra Saunders a.k.a. Hawkgirl in The Flash for a few episodes. Similarly, in Arrow, she made a guest appearance in a small role which paved the way for a significant role in Legends of Tomorrow for a whole season.

Hawkgirl in the comic book series published under DC’s label is a mace-wielding superhero character with the power of flight which is possible with wings that come forth from her back on command.

To begin with, Ciara amassed $1 million-$5 million net worth from her acting stints. Considering a tv and theatre actress that is a significant sum to collect in such a short period accrediting to her abilities as an actress.  Besides these, Ciara also is a freelance singer occasionally performing in clubs and small concerts.

According to the U.S. Bureau of Labor Statistics, the median salary of actress averages around $46.8k. Hence, we can expect her to earn at a range of $25k-$50k. At the same time, Ciara also endorses Nike, Noglu New York, and MatsyRad. So she must make a considerable sum from such a source as well.

Ciara mostly keeps her personal life from media. She enjoys a private, secluded life, so it is difficult to pinpoint her relationship status.

Nonetheless, Ciara must be a workaholic, directing her focus only to her career. As a result, she refrains from entangling in relationships. We will update this section as soon as we find out more! In the meantime, we wish her much success.