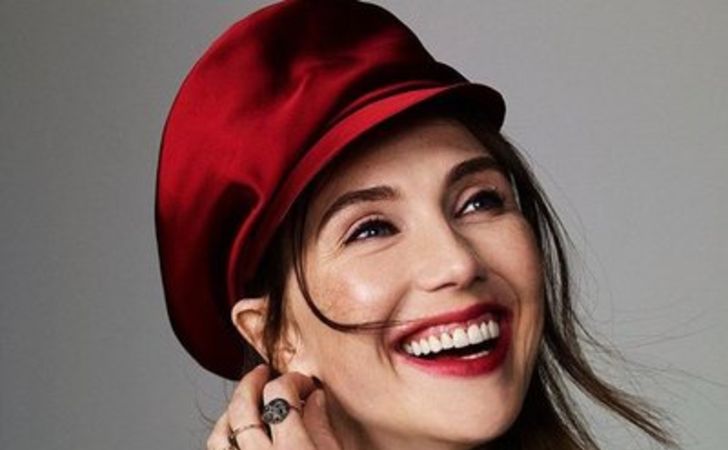 Carice Van Houten is a Dutch actress who rose to prominence for her role in Game of Thrones, HBO’s critically acclaimed fan-favorite series. If you have not figured it out yet, well, we are talking about The Red Queen in today’s article.

Dear readers, let’s dig a little deeper and get to know Melissandre, shall we? Valar Morghulis!

Carice Anouk van Houten was born on 5 September 1976 in Leiderdorp, Netherlands. Hence she is a Virgo. Carice was born to Margje Stasse, a board member of Dutch educational tv and Theodore van Houten, a broadcaster and a writer.

She is a Dutch national; however, she has Scottish ancestry from her paternal side of the family. Carice has a younger sister named Jelka van Houten. She is of white ethnicity.

She was brought up with silent films and hence preferred to play scenes without dialogues. Van Houten briefly attended Maastricht Academy of Dramatic Arts but would later continue her education at the Kleinkunstacademie in Amsterdam.

We don’t know how old Melisandre is(probably hundreds of years), but unlike her on-screen alter ego, Carice is a mortal with no affiliation to the Lord of Light. She is 43 years old. And oh word, she doesn’t look a day older than the mid-30s. Although Game of Thrones gave a lot away about Carice Van Houten’s body, we are here to discuss things in a non-pervy way.

Emilia Clarke: Game of Thrones Actress Opened Up About Her Health Scare. How Much Is Her Net Worth? >>

Her bra size measures 34B and wears a dress and shoe size of four and eight, respectively. A natural brunette, Van Houten, also possesses bright blue eyes. Fun Fact about Carice: She is multilingual and can speak English, French, Dutch, and German. (You can add high Valyrian and Dothraki too.)

Career | What Happened to Lady Melisandre?

Carice’s acting career started with a leading role in the Tv film Suzy Q. Her acting includes many highly acclaimed parts for which received nominations as well as bagged nominations for them. Suzy Q., Undercover Kitty, Black Book, etc. were some of those.

Black Book was the most expensive ever made at that time and went onto be successful at the box office. Moreover, her big-screen roles didn’t end just there. Carice went to star in many movies like the critically acclaimed Valkyrie, which stars Tom Cruise, Repo Men, Black Death, and The Fifth Estate, a film about the exploits of Julian Assange.

Nonetheless, her role as The Red Queen, Melisandre, is the most popular to date. Game of Thrones’ sees Carice portray a priestess, a follower of Lord of Light, who is a 400-hundred old cunning, cryptic, speaker of many tongues and has the power to resurrect people from the dead. Fans were especially surprised at her climactic death in the shows final season.

Apart from involvement in movies and Tv shows like Game of Thrones, she also stars or appears as a guest on many Dutch Tv shows like Goede daden Bij daglicht: Op weg, Luifel & Luifel, Kopspijkers, In therapie, etc. She also lends her voices in The Simpsons as Annika Van Houten.

Van Houten earned Golden Calf, Pisuisse Award, and the Top Naeff Award for her roles in various Dutch movies. Also, her most significant nod was Primetime Emmy Award nomination for Outstanding Guest Actress in a Drama Series for her final performance as the character in the season 8 episode “The Long Night” in 2019.

Carice also received three Screen Actors Guild Award nominations for Outstanding Performance by an Ensemble in a Drama Series in 2014, 2016, and 2017 for the role of Melisandre.

In addition to her acting career, Carice is also a talented singer.

Net Worth | What Is Carice Van Houten’s Net Worth?

At present, Ms. Van Houten has a net worth of $5 million. She garnered this amount from her decades-long career. Nevertheless, we do believe that her net value will rise with time, for the night is long, and Carice is still young. (Yes, we threw in a little G.O.T. reference 🙂 )

Her per episode salary are as of yet unknown. We will update this soon!

Relationship Status | Who Is Carice van Houten Married To?

Eventually, she is dating Australian actor Guy Pearce, whom she shares a child named Monte Pearce, born in August 2016. Carice mentioned she dislikes Hollywood and hence lives with her family in Europe.

Dear Readers, we hope you enjoyed this article! Lastly, do check out our other links.