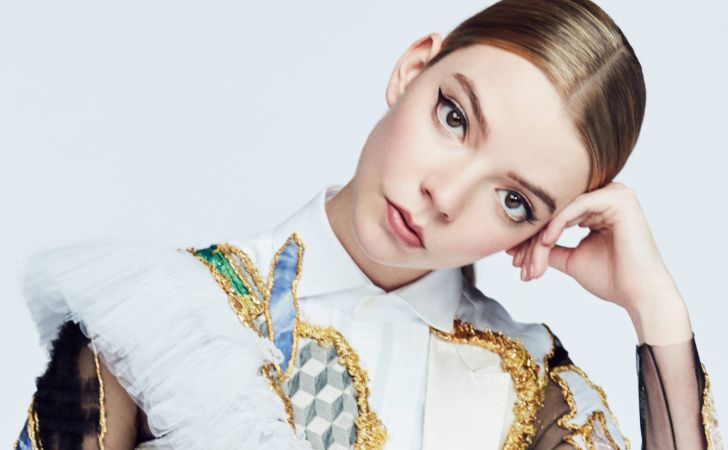 Anya Taylor-Joy is an American-born English-Argentine actress and model recognizable for roles as Thomasin in The Witch, and especially noted for her role in the highly-acclaimed M. Night Shyamalan’s movie Split and Glass where she played as Casey Cooke.
Anya is a versatile actress- a real talent in the acting field. Today we discuss the multi-faceted Anya!

Anya Taylor-Joy, born as Anya-Josephine Taylor-Joy, was born on 16 April 1996, in Miami, Florida, U.S. She was born to an English-Spanish mother, who is a photographer and interior designer and a Scottish-Argentine father, who is an international banker turned motorboat racer. Moreover, Anya is the youngest of six children. Her birth sign is Aries.

??? No biggie… it’s just me… in @britishvogue . AGHHHHHHH!!!! Thank you SO much @edward_enninful for this unbelievable life moment… your love+support means the world to me? And the legend @craigmcdeanstudio for always being freaking awesome 🙂 BISOUS A TOUS!??

Despite being an American-born, she had to relocate as a toddler with her parents to Argentina. After a brief stay, the family moved to London. Also, she is fluent in English despite her mixed heritage but her primary language until the age of 8 was Spanish.

However, she learned English in a preparatory school called Hill House in Kensington. Anya trained to be a ballet dancer from a young age, but she had to give up on the dreams due to constant migration.

Nonetheless, Taylor-Joy would later stumble upon modeling which was fortuitous as that paved a passage for her acting career. At the age of 16, an agent of Storm Model Management scouted her outside Harrods Department Store.

She measures 33–inches of the bust, 26–inches of the waist and 34–inches of hips. Also, Anya wears a bra size of 32A and a shoe size of 7.5. However, her dress size is unavailable.

Anya’s most distinctive feature is her blonde locks (sometimes dark) and big-beady eyes which are hazel-colored. At the same time, she has a fair complexion along with thin lips and a bright smile.

She found a new height of fame with her portrayal of Thomasin in Robert Eggers‘ period horror The Witch. It received rave reviews at the Sundance Film Festival.

Anya made her television debut with Endeavour. In television, she was in a recurring role as well as in some regular parts. For instance, Atlantis and The Miniaturist are some of her recurring characters.

She starred in BBC Two’s hit crime drama series Peaky Blinders as Gina Gray. To illustrate, the series follows the exploits of the Shelby crime family in the aftermath of World War I. In 2019, Anya appears as a voice role for Brea in Netflix’s The Dark Crystal: Age of Resistance. In the same way, she appears in The Queen’s Gambit as Beth Harmon who is under production.

However, her roles in certain movies are what launched her to fame. Some of her movie roles include Morgan, Barry, Playmobil: The Movie and Radioactive. Let’s dive into the critically acclaimed movies which also propelled her to stardom.

??BAD BETCHES?? GREAT day of press here in Boston for #thoroughbredsmovie … and excited to share more with you guys tonight for a couple of Q+A’s! Good to see ya Mass??

The 2016 film Split which stars James Mcavoy follows a story of a deranged man with multiple personalities in which Anya stars as the abducted Casey Cooke. Kevin has 23 different personalities who fight for control until they unleash an unknown 24th persona which is stronger than others.

Similarly, she stars in the psychological horror mystery Marrowbone that follows a family who moves to an ancestral home where mysterious forces are lurking around.

In 2017, she starred in Thoroughbreds which follows a story of two girls hiring a drug-dealer to kill a man. The film received critical acclamation and also received praise for the performances for the two stars.

Anya returned for the sequel of Split, Glass in 2019 which combines the events of Unbreakable and Split. Furthermore, this movie follows Mr Glass/ Elijah Price, who plans to reveal the truth about the existence of superheroes. This movie was a critical success as well.

?✨MAGIK✨? This is crazy- so much love @joshboonemovies for bringing me on this crazy adventure… it's gonna be a wild ride???? #xmennewmutants

Nevertheless, she received nominations for Split and Thoroughbreds and also in the category of Best Young actress in several awards ceremonies. In 2017, Anya received the Trophée Chopard award in the Cannes Film Festival for her exceptional talent.

Reportedly, Ms. Taylor-Joy has a net worth of around $1 million after years of her involvement in movies and television. Granted that she only garnered $1 million net worth, she is, however, receiving $100-k$200k for her current roles.

Anya is also a model so she must earn from such campaigns as well. Her brand endorsements and other financial assets remain under the radar. This article will update after more information is available!

Relationship Status | Who is Anya Dating?

This rising star dated Irish actor, model, and producer Eoin Macken in 2017. In fact, news surfaced that the two couples got engaged. We wish her a happy life and a healthy marriage in the future.

On the other hand, Anya’s past flings remain unknown to the media.