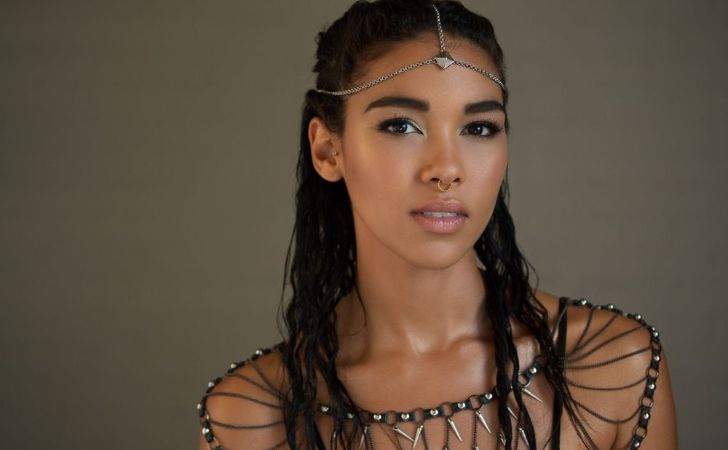 Alexandra Shipp is an American actress who is also a prominent singer, songwriter, and instrumentalist. People first took notice of her after she portrayed a real-life singer Aaliyah in Aaliyah: The Princess of R&B and Kimberly Woodruff in the Oscar-nominated Straight Outta Compton.

A naturally talented actress and singer, Shipp took a long way to success and is still heading for the top. Today we will talk about all things Alexandra Shipp, for instance, her early life, career, and relationships!

Alexandra Ruth Shipp, professionally referred to as Alexandra Shipp, was born to a Kundalini yogi mother and a musician father. Her birth date is July 16, 1991. Also, Shipp is a sister to James and Jordan and even has a stepsister named Kasia.

Although Alexandra was born in Phoenix, Arizona, U.S., she shares African-American heritage from her father’s side and European-American from her mother’s side.

Moreover, she is of Cancer zodiac and holds an American nationality. While residing in Arizona, Shipp attended Squaw Peak Elementary School, Arizona School for the Arts, and later attended St. Mary’s Catholic High School in Phoenix. Upon completion, she moved to Los Angeles as she desired to pursue the acting profession when she was just 17-years old.

Shipp is 28 years old at present. Further, she is a young actress, and as per her profession, she has requirements to be fit, and as such, her body measurements include 34-inches of the breast, 23-inches of the waist, and 34-inches of hips. Similarly, Alexandra weighs about 56 kg  (123.5 lbs). Generally, she fits the petit classification.

“I don’t think you could do another ‘Shaft’ the way they’ve done ‘Shaft.’ I think the times are changing for the better. When you’re addressing a woman you address a woman, not a b*tch, or p*ssy, or little miss, or baby girl — like get out of here with that, put some respect on my name! That’s not this world anymore, and I love that a brand like ‘Shaft’ is turning that on its head and it’s saying, actually, that’s not how you say it anymore.” Thank you @womensweardaily for talking with me! #outnow

On the other hand, Alexandra possesses natural black hair, thick eyebrows, plump lips, and mild complexion, all accentuated by her beautiful dark brown eyes. Fans mostly spot her with unique hair-dos all the time, ranging from curly to afro to bald. Added to that, she has an eclectic taste in fashion.

The year was 2009, and Shipp graced us with her adoring presence with a debut in Alvin and the Chipmunks: The Squeakquel. She played the role of Valentina. Before finding success in the big-screen, Alexandra utilized her talents in the television. In 2011, she appeared as a guest in Switched at Birth in the role of Ashley.

Further, Victorious, Awkward, Ray Donovan, and Your Family or Mine were her guest appearances. In like manner, Drumline: A New Beat and Aaliyah: The Princess of R&B were a made-for-tv movie, and the latter propelled to another height of fame. In short, it opened a passage for starring roles in the future.

June 7th will be unlike anything we’ve seen before #xmendarkphoenix

Eventually, Alexandra landed a role in Straight Outta Compton, where she played Ice Cube‘s wife named Kimberly Woodruff. The biographical movie opened to rave reviews and became a hit amongst the critics and fanbase as well and went onto pick up an Oscar nomination. The following year, Shipp auditioned for the role of Ororo Munroe, a.k.a. Storm and landed the role beating out several auditionees in X-Men: Apocalypse.

In the same way, she starred in Tragedy Girls, Spinning Man, and Dude. The same year Shipp starred in another critically hit movie Love, Simon, which included a talented cast like NickRobinson, JoshDuhamel, Katherine Langford, and Jennifer Garner. In Deadpool 2, she had an uncredited cameo role.

You thought you were getting ONE preview today?! Guess what, @jexithemovie is coming out and @andybovine and I are taking the love of cellphones and social media to a WHOLE NOTHER LEVEL! Thank you @cbsfilms, @lionsgate, and @eonefilms for such a fun job! Can’t wait for the world to see this ❤️

In 2019, Alexandra went onto star in 4 films. That’s right—4. A Dog’s Way Home, Dark Phoenix, Shaft, and Jexi are the films that saw her in leading roles. In Dark Phoenix, she reprised role as Storm, weather manipulating omega-class mutant. Likewise, in Shaft, she played the part of Sasha, and the movie starred Jessie T. Usher, Richard Roundtree, and the ultimate ass-kicking king Samuel L. Jackson.

On the other hand, Jexi is a romantic comedy, and Shipp pairs up with the vastly talented comedian Adam Devine. We can spot her as Cate Finnegan- Adam’s characters’ love interest.

Furthermore, Alexandra will appear in Silk Road and Kung Fury 2, both of which are in the final stages of production. It shouldn’t go unnoticed that since the year she started acting, she appears in tv shows and movies without missing year. Her passion and efforts are commendable!

Recently, Alexandra amassed a collective net worth of $3 million. She achieved success in a short period, and it is only likely that an actress of her stature has such high value. Apart from this number, her income and salary remain in the dark.

The ultimate #fbf ? my sweet baby at 10wks and then 2yrs ? I love this silver surfer so much!! #Layla #bluenose #pitbull

In her free time, Shipp likes to go on vacation or make use of her leisure being adventurous. A wanderlust at heart, she is keen on traveling and has equal fascinations with learning culture from different countries. However, Alexandra also enjoys her time going around with her pet dog.

In particular, she was in a relationship with X-men Co-star James McAvoy. The two actors broke up for some undisclosed reasons, although it does seem Alexandra is enjoying her single life with her family and friends.

Nonetheless, we do not know any other past relationship. A career-bound woman like her must be directing her focus entirely on her upcoming projects and is just too busy with life to find time to settle down. We wish her much success in Mr. Right as well as for her career endeavors!