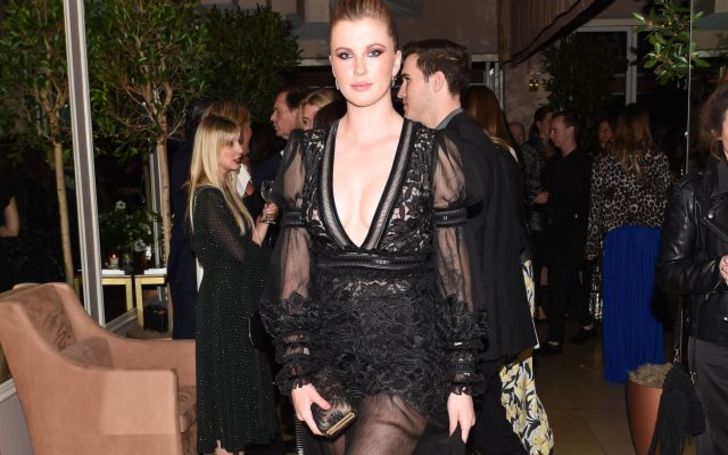 Ireland Eliesse Baldwin or Ireland Basinger-Baldwin is the daughter of the famous actor, writer and comedian producer Alec Baldwin, and actor Kim Bassinger. As it is said that “The apple doesn’t fall far from the tree”, Ireland Baldwin ended up being an actor. Similarly, the famous actor pursued her career in modeling and disc jockey.

Consequently, the actress, model went through a lot of pressure living with such talented, famous actors.

So let’s get started with the quick fact first;

Ireland Baldwin was born on October 23, 1995, in Los Angeles, California, the USA. Baldwin family has been able to stabilize their position in Hollywood as actors, producers or models. Apart from her father Alec Baldwin and mother Kim Bassinger, she is also the niece of famous actor Daniel, Stephen, William Baldwin and cousin of model Hailey Baldwin.

Ireland is also blessed with a younger half-sister Carmen, and three half-brothers, Rafael, Leonardo, and Romeo. It is from her father’s second marriage with Hilaria Thomas. Besides, she belongs to white ethnicity.

The beautiful actress Ireland Baldwin is  23 years old as of now. The model has an astonishing height of 6 feet 2 inch. Her slim body with the fair skin complexion grabs all the attention on her runway.

Along with such qualities, her light brown eyes with the blonde hair is like a cherry to the top.

Baldwin is descended from Mayflower passenger John Holand (1592-1673), and through this line, is the 14th generation of her family born in North America and the 15th generation to live in North America. In 2014 Baldwin pursued her study in cinematography and acting in New York Film Academy.

With all the Hollywood geeks in her family, she was quite sure where she was heading to. Luckily, in March 2013 she got a chance to sign the contract with IMG Models. In May, Baldwin appeared in W Magazine‘s It Trend, It Girl feature.

The famous model also got an opportunity to be photographed by Patrick Demarchelier for the same cause. Furthermore, she made her appearance in an editorial Dujour magazine photographed by Bruce Weber.

In addition to that, she also made her modeling debut in a swimwear editorial for the NY Post. Not only that she got her acting debut in Grudge match where she played as a younger version of Kim Bassinger’s characters.

In 2017, Baldwin appeared in campaigns for True Religion and guess. In May, Baldwin graced the covers of Elle Bulgaria, L’official Ukraine, and Marie Claire Mexico. Added to this she also got to appear in the film Campus Caller as the main character Macey Duncan.

Although, having so much success in her career, she had to resign from the IMG model because of her stint at rehab. However, in June 2015 she signed a contract with DT Model Management.

The model followed her mother’s footsteps after twenty-four years and posed naked in an anti-fur campaign of PETA  saying “I’d Rather Go Naked Than Wear Fur”.

In addition to that, the promotional video for the piece featured Baldwin stating that she has an explicit “no fur” policy in her contract. In September Ireland Bassinger nailed in the cover of GRAZIA shot by Yu Tsai.

Likewise, Ireland showed her another talent of DJ for the Norah Restaurant’s 3rd anniversary along with Carolina D’amore. Later on, she convinced that she was “Definitely not a full-time DJ”.

Love Life: Is She A Lesbian?

Well, well, well that’s the question we all are wondering about. Is she a lesbian???

In 2014, she grew affection for rapper Angel Haze which gave the inspiration and enthusiasm to the LGBTQ community. From then on the question of whether she is a lesbian or not has been arousing on a lot of people mind.

Later, Baldwin ended the relationship with the rapper, before checking herself into Malibu’s Soba Recovery Center for “emotional trauma”.

After that, Ireland Baldwin coupled with professional surfer, Noah Schweizer since 2016. However, due to some personal disputes, they ended their relation.

Meanwhile, she got together with a musician, Corey Harper.

Until now, she has not revealed completely about her sexuality but she supports LGBTQ to the fullest.

Up to the present time, the actress has a net worth of $1 million. Due to her hardship on W Magazine, Vanity Fair, and Elle. She has been able to bag a lot of fortunes from her role in various movies.