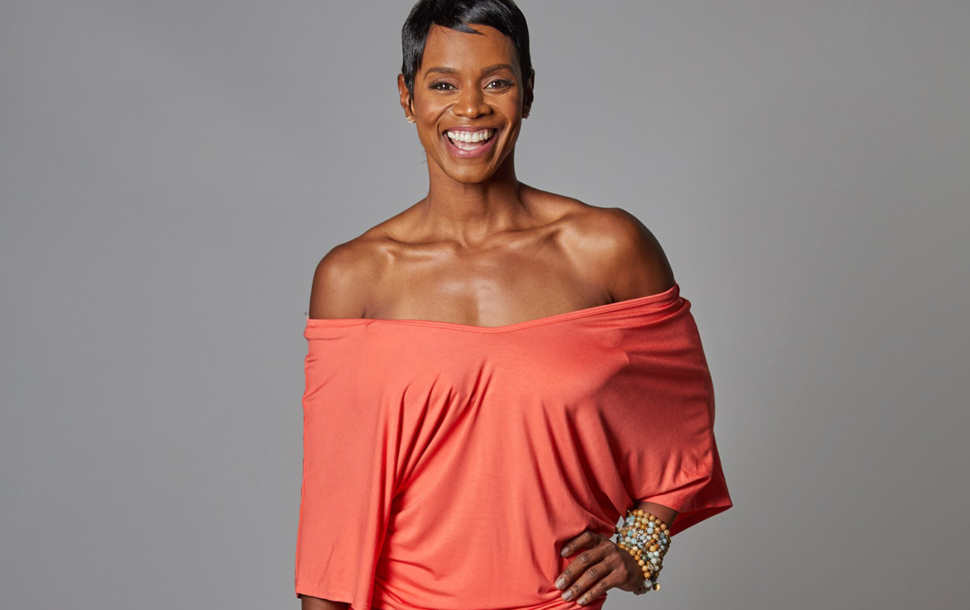 Meet Rashan Ali, then radio host, now an actress and talk show host. Rashan is a very stunning woman with a charismatic personality, killer looks, impressive appearance, and a very bright smile. Born in a small town, Rashan had to work hard to pave her way to who she is now. With her determination and passion for work, there was no stop in her success. Now, Rashan has a completely successful show running in her hand, with a supporting husband and two adorable daughters by her side. What more does a woman need? Let us find out about Rashan’s success story and more about her early life, husband, kids, net worth and salary.

Quick Facts About of Rashan Ali

This gorgeous actress was born on 27th of June in 1973 in Decatur, Georgia, the United States to Bick and Joyce Godfrey.

Rashan Ali likes keeping things private, away from the eye of the public. Even after coming a long way in her career, she hasn’t revealed much about her childhood and early life. Her educational background, her siblings or relative, no such information has come out yet.

However, it is known that Rashan Ali went to Florida A&M University and graduated from there in 1997.

Rashan Ali’s personality is so youthful and vibrant that you won’t believe she has come along so far. She a few steps away from aging five decades, yes Rashan Ali is 46 years old as of 2019. However, her attractive figure and beauty make it less believable.

With her striking figure and above than average height, Rashan looks as young as ever.

Wow. Brought in the New Year with a bang at @raapnetwork’s NYE In The ATL with @frankski & @tracisteele! Love to the people who simply wanted to party. The energy was vibrant. Surrounded by my love, Smitty, my LS @cwhitt_24 and her Mr., it was a good ole time! @natttaylor thank you for this custom piece and executing my vision! @shoesnobbinc, love these super cool boots. To @paulabrittstyles…my hair architect and @nickeymartin for my face, my love to both! Hope all of you embrace your NOW in 2019. Thank you for supporting me. * * #everybodyshomegirl #tvpersonality #talkshowhost #sheworenatttaylor

After graduating from University, like most of us, Rashan Ali started looking for a job. Then in 2002, her talent was noticed by Radio One 107.9 based in Atlanta, Georgio and worked there as a radio person for seven years. During her time there, she also worked for CBS Radio.

After Radio One 107.9, Rashan became a Freelance TV Correspondent and Sideline Reporter for NA-TV and ESPN. She held that position for until 2012 and then after she became focused n her acting career.

Rashan Ali is also a recipient of numerous awards including Unsung Heroine Awards and March of Dimes A.I.R awards for her contribution in journalism.

Rise of Fame for Rashan Ali

Although Rashan Ali worked for a decade as a radio host and correspondent, she came into the actual limelight when she entered the entertainment industry.

Rashan became dedicated in her acting career after leaving her jobs. However, it was in 2007, when she made her first breakthrough in a movie Three Can Play That Game as Monica. The movie was a romantic comedy with Vivica A. Fox

, Jason George and Jazmine Lewis in the lead role.

It was in 2013 when Rashan Ali got chosen for the lead role in a film A Time for Love, alongside Na’Jhari SanGai Atkins and Mekhi Biley. She continued acting with a role in the television film A  Christmas Blessing in the same year.

In 2016, Rashan Ali was seen starring in a comedy movie, Definitely Divorcing with Terri Abney and Carlos Aviles. Then in 2017, Rashan was one of the hosts, alongside reality TV star Quad Webb-Lunceford

After Rashan Ali became a host of Sister Circle, her fame rose to even more prominence. Sister Circle is an exciting show that brings compelling and humorous thoughts of hosts that includes other topics like a relationship, parenting, fitness, and personal finances.

Sister Circle also examines the latest trends on the market and everyday frustration. It also allows views to interact with the hosts when it goes live. However, on August 2018m Kiana Dancie was replaced by Trina Braxton.

While of the Hollywood celebrities struggle to stay married, Rashan Ali is basking in her happily married life. It is almost two decades of togetherness as a husband a wife, and they are still happy and having the joy of a perfect family.

Rashan Ali married Brain Smith in the year 2002. Brian is a wonderful person and sweetest husband who always endeavors on supporting his wife.

Well, well…look who’s 12?!?! Yep, our first born, Bailey Sky, is celebrating her birthday today. Your beauty and intellect are unmatched. You are truly an admirable young woman. May God continue to guide your path in your last year as a tween! Goodness, you were just a baby. We love you, deeply.

Rashan Ali Net Worth 2019 and Salary

Since her start of a career, Rashan Ali has received many praise and accolades for her work in both radios as well as television world. Well, it is fair to wonder how much has Rashan Ali accumulated. Her career as a radio host, actress, and television host has paid her well.

Rashan Ali’s social media accounts of Instagram and Twitter is a total dope. It is filled with her gorgeous picture, and you will also get a sneak peek of her private life with friends and family. Also, her Instagram picture completely shows her adorable and lovely relationship with his husband, Brian Smith.

From me and my king….we hope you go out and get it! #blacklove